How to read a synoptic chart Ground handling

High Pressure what is it?

Well a high pressure system is what we fly in most of the time, it is a sinking airflow. Which sounds not quite right from a flyers point of view why fly in sinking air !

Well high pressure is more stable than a low pressure, think of Africa and thunder storms and you have Low pressure and yes you have rising air with Low Pressure.

In high pressure do not forget that when the wind hits the hill it is forced upwards giving a limited amount of lift. If a thermal is mixed in with this rising air we can use it to rise even higher. After the air / thermal has risen to a point that it decays, we will slowly start to come back down to the ridge lift height.

So now we can move onto the weather map and absorb some knowledge that we can use in our flying. 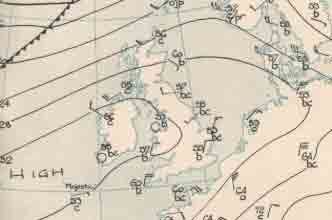 Look at the weather map the diagram shows the U.K and some strange looking lines around it, they are called Iso bars.

On the left of the map you can see the word HIGH this indicates that the pressure is high easily above 1000 mil bars.

But what would the wind speed be ?

Well lets start with the Iso bars one is in the France and one is in the Midlands and is the center of the high pressure this is where the pressure is most high it could be 1056mbs.

So the two Iso- bars are quite far apart and I would say the winds in Brighton would be about 7 to 9m.p.h. But wait what time of year is it and is the sun out. All these factors change the windows that we fly in.

If a farmer has a field in front of take off and he turns the top soil over the color of the ground could be darker than the other fields, this would or could be a source of a thermal. Increasing the speed of the wind, this is not the true wind speed it is combined with the thermals that could be shaping the days weather. Later the cloud could be forming due to convection, this would over the sky with cloud and compress the air and might increase the true wind speed.

So what have we learnt so far, well the weather in a micro climate is hard to predict, that the true wind is fairly easy to predict and that many more factors such as is it winter is it summer will there be thermal's.

Now if it were spring and the air was fresh with the sun out facing the slope I would expect the true wind to be the same and thermal to increase the airflow to about 12m.p.h by midday the wind would be 15 to 17 mph And we would have gone to lunch by 2.30pm the winds would have steadied to 13mph and by 3.30pm the sun would be losing its force either due to cloud cover or of its position.

Often pilots look at apps to guide them on the flying conditions.

Personanly i find this a mistake as no app will include the following.

Ridge lift at take off, is the ridge facing into sun directly or in shadow ?

If a north facing ridge is in shadow in the month of April. Your find that in a high pressure system that the ground will produce ground frost. This you may not even notice as take off is free of frost, as take off is not in shadow.

By 10.30 am the sun may strike the north facing ridge and the thermic air is a trigger like a light bulb being switched on. The result is dangerous to top land later, winds are replaced by thermic air traveling up the ridge. I could go on but hopefully you would have picked up some key pointers ?

How to read a synoptic chart.